This article could have been titled – What not to eat before a workout. But the food and drinks listed below are kind of ok.

I was totally against high GI sugar being combined with exercise until my friend’s nutritionalist – his NUTRITIONALIST – told him to have 10 jelly beans and a cookie after weight training.

There are a few small luxuries that people on a quest for a great physique – whether it’s more muscle, less fat, or both – can indulge in that may actually help them achieve it.

There’s a deluge of information which swamps your screen when you search for healthy diet tips and clean recipes online.

There is a lot less when you search for treats you can eat or drink without it spoiling your regimen.

In fact, there are quite a few articles for recipes using this protein powder.

That type of soya bean, this vegetable or that ‘replacement-for-the-real-thing’ that tastes ‘delicious’ in lieu of the actual food you want to stuff your face with!

This article is not about replacements and making do with the substitute that doesn’t taste the same.

It’s about the real deal treat, and whether it can in some way help your physical performance in some way.

Living on a clean and healthy diet is rewarding in so many ways. Some people take to it like a duck to water and don’t look back.

The best examples of people that can do that are those who decide to ‘straighten out’ their life from a history of alcohol, smoking and whatever else.

They find they are so much happier and feel so much better that there is no going back after the transformation.

Other examples include professional athletes, nutrition experts and fitness models.

All of whom tend to have to live the ultra-squeaky clean life, by virtue of their chosen field.

However, it is by no means easy for these people to stay so rigidly dedicated.

A person not driven by profession or desperation is even more likely to stray from the righteous path and find themselves all to often elbow deep in the cookie jar.

That’s because the effort involved in always preparing clean meals (and eating them) is occasionally/often a steep climb to a summit that isn’t always that awesome when you get there.

Take one of those grim looking green smoothies, for example.

Sure they can taste okay, or even good – with the right ingredients.

but if you have one of those to look forward to as your breakfast, or even your dessert replacement, it can wear a bit thin.

Yes, there’s a load of evidence to suggest you can alter your stomach flora over time so you might start to actually crave the grim green smoothie, but chocolate was invented for a reason, and that reason is taste.

It’s also the main inspiration for this article.

Whether you agree with the first few paragraphs or not, many people find clean-living tough sometimes.

So it’s nice to know that even some of the decadent things we crave can also help our road to physical improvement.

Who doesn’t like dark chocolate? Crazy people, am I right!?

Just kidding, it’s not for everyone (I personally like it but prefer milk chocolate. Boy do I find diets hard!).

However, if you do love the high percentage rich cocoa stuff then there is good news.

Recent research supports the long-standing evidence that dark chocolate is good for you.

It can help you reduce your oxygen cost during exercise and even act as an ergogenic aid for moderate intensity exercise.

Let’s break that down a little. The first statement that it’s good for you refers to the flavanols in dark chocolate which can help rid the body of free radicals, as an antioxidant.

The ‘helping you during exercise’ part is a finding of this new research which highlights DC’s ability to increase the bioavailability and bioactivity of Nitric Oxide.

This can decrease the oxygen cost during moderate level exercise. This in turn means your oxygen usage is more efficient and you can therefore go for longer.

Nitric Oxide (NO) should ping a bodybuilder’s radar as well.

NO is a natural vasodilator, allowing for more blood, nutrients and oxygen to get to the working muscles.

Ergogenic aids are basically those which can enhance physical performance, thereby maximizing results from it.

The results of the scientific studies reveal that for short duration moderate intensity exercise, dark chocolate may be an ergogenic aid.

How Much DC Though?

They used 40 grams in this test. That’s not bad at all for a treat. Just to be clear though, they did the test in comparison with white chocolate, which did nothing for performance.

So in this case, you have to make sure it’s the dark stuff.

Coffee and Working Out

Okay, so it’s known that caffeine helps with energy levels and is present in nearly every energy drink available.

As well as coffee of course, but a lot of research seems to indicate that taking caffeine is the best way, and that drinking it as a beverage is ineffectual in comparison.

Not so, according to some research, which actually tested caffeine (supplemental) and caffeine in coffee side by side, using decaf and placebo as controls.

During the test, triathletes and cyclists were observed.

Exercise intensity, carbohydrate and fat oxidation, performance times and average power, were so similar between caffeine (coffee) and caffeine (supplement) that there was no statistically significant difference found.

What about a caramel latte with three sugars and full fat whipped cream with a donut on the side?

But don’t be afraid to get a nice cup of joe on your way to the gym.

Just don’t do max-HR sprint sets after an extra large espresso because I won’t be held accountable for what happens!

Jelly Beans After a Workout

I was totally against high GI sugar being combined with exercise until my friend’s nutritionalist – his NUTRITIONALIST – told him to have 10 jelly beans and a cookie after weight training.

Annoyed after hearing it, I went home and checked up on the science. And with a bit of poetic license where the cookie was involved, the jelly beans certainly seemed to hold some weight.

Source: Jelly Beans Among Supplements To Be Studied For Effectiveness In Improving Exercise Performance And Warding Off Fatigue After Exercise – University Of California, Davis – Health System (link opens in new window)

After intense weight training, one of the most efficient ways to slow catabolism and give your liver and insulin something better to do than pillage your muscle for glucose, is to let them play with some sugar.

In fact, a bit of high GI (Glycemic Index; high refers to the speed at which the sugar enters blood stream) food is ideal for restoring blood sugar levels and speeding the process of anabolism along.

Yes, we train to break muscle down (catabolism) in order for it to grow back stronger (anabolism and hypertrophy) but there’s no harm in helping it along.

At both times we are effectively in a state of malnourishment and you may be breaking down muscle as a source of energy.

How Many Jelly Beans?

And I still refer back to my buddy’s consultant and say something like between 10 and 20 jelly beans is a good guideline.

And if you want to replace 10 jbs with a cookie, then go right ahead, but blame that poor anonymous nutritionalist if it adds some grab-handles to your waistline, not me, are we clear? 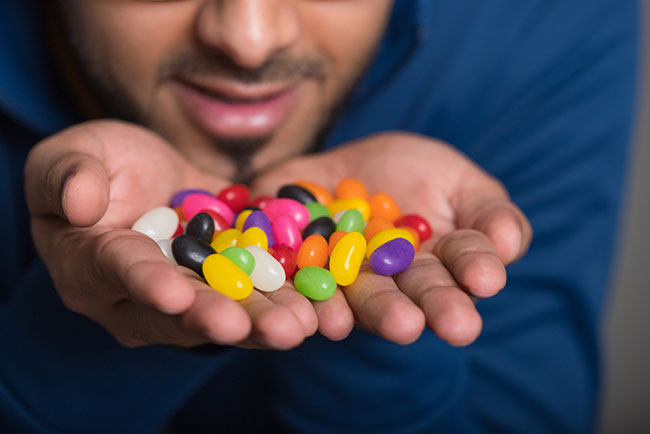 Article Name
Workout Foods that are Bad For You But are Actually OK
Description
Living the clean diet and exercise life gets a bit tough sometimes. There are little treats you can throw in which don't impede you and can actually help...
Author
Mark Jones
Publisher Name
www.Emergencylink.com
Publisher Logo